A Night to Remember

After a wonderful week-long visit, our daughter and family departed Australia early on Boxing Day. We had a great time with the grandkids and were very sad to see them leave.

Not letting any moss grow between our toes, Meryl and I hopped on a bus down to Manley where we met our old cruising buddy, Andrew from Eye Candy. We had been invited to watch the start of the world-famous Sydney Hobart race aboard Moonshadow, a 62 ft. Deerfoot sailing yacht, owned by cruising friends John and Deb Rogers of San Diego. This was a lifetime dream for me to see the start and to be able to watch the race aboard Moonshadow was the icing on the cake. The 630-mile race goes from Sydney Harbor NSW to Hobart, Tasmania.

John and Deb are the consummate hosts and you know you’re in for a great time.  Even though it was somewhat early, the course was lined 10 boats deep along the route, including large ferries, tour boats, every size sailboat imaginable, and a myriad of other oddball craft. John had his hands full dodging the other boats as everyone jockeyed for the best position to see the rapidly approaching racing yachts.


The first two boats to reach us were the RP 100 Blackjack with Bob Butterworth as crew, closely followed by the 100 Supermaxi LDV Comanche, which included world-class sailors Jimmy Spithill as crew and Stan Honey as navigator. This was like a “Who’s Who” of the world's best sailors.


Even though the wind was relatively light, the maxi’s moved along at a good clip and were soon out of sight down the coast. They were followed by the Volvo Challenge series yachts and a bunch of offshore racing yachts including the famous Dorade that we saw in Antigua years ago.

A few days later we hemmed and hawed about sailing Flying Cloud from Pittwater (seven hours south) to Sydney to watch the New Year's Eve celebration. An email from our friend Marce on Escape Velocity stated “this is a once in a lifetime opportunity. You have to do it.”  We had heard New Year's Eve was a zoo with thousands of beer imbibed and poorly anchored boats trying to watch the festivities and I was paranoid about anything happening to Flying Cloud this close to the sales date.  We finally decided the fireworks were not to miss the event and wanted to spend a little more time in Sydney before heading back stateside. The sail down was more of a motoring event but we eventually arrived at the very popular Spring Cove just southeast of Manley. It was chock a block full of boats but we found a good spot and just vegged out for the rest of the day.

The next morning we decided to move further into the harbor to Athol Bay, near the Tarango Zoo, to claim our space for New Year's Eve. Good idea since it was already getting crowded the day before New Years'. We connected with friends BJ and Katherine Porter on Evenstar. We had agreed to sell them our Sailrite sewing machine and decided now was as good as any time to transfer the 40 lb. machine over to their boat. Thank goodness they had their son to help out as the water was rough from all the boat wakes.

One of the problems all over Australia for cruisers is the lack of places to tie up or land your dingy. Many times your only choice is to find a stretch of beach and haul the dingy up. In order to go grocery shopping, we snuck the dingy under the large boarding ramp of the Taronga Zoo ferry landing, not sure if it would be even there when we got back. We took the bus up the steep hill past the zoo to the very posh (think old Sydney money) Mossman neighborhood to stock up on groceries and other sundries. We could have stayed and wandered about for the rest of the day looking at all the quaint stores and beautiful 19th-century architecture.

As the dawn broke on Dec. 31st, we could see more and more boats headed towards the area where we were anchored. A number of these boaters had very little anchoring experience (they normally use mooring balls in Australia) so what was comical at the beginning became more serious as the day progressed. Many already anchored skippers just stood on their bow and warned off any boats trying to anchor too close.  I choose to be a nice guy, which turned out to be a huge mistake.

Our first encounter was a 45 ft. sailboat that looked so derelict I was amazed it was still floating. Amazingly, it had about 7 to 8 young kids aboard and it soon became obvious that they all lived aboard the boat. The skipper tried anchoring with two anchors (a terrible idea given the conditions) and didn’t have an anchor windlass so every time he had to re-anchor he had a long line of kids help pull up the rope. He finally gave up and moved a short distance away.

Our next situation was a white, 45 ft. powerboat who anchored somewhat close, but seemed OK at the time. When the wind shifted, however, he swung right into us. As we were fending him off he mentioned: “You’ve been so nice, everyone else has been yelling at us.” By the sixth time he hit us (not hard but still concerning to someone wanting to sell his boat in a short time), I finally started yelling. He refused to move. The crew of Evenstar came over to try to dissuade the guy, but it wasn’t until some Australian’s visiting Moonshadow nearby(including a former cop) came over and read him the riot act that he finally moved.

After all that trauma Moonshadow took pity on us and invited us over for drinks. We ended up staying on board for the remainder of the evening. 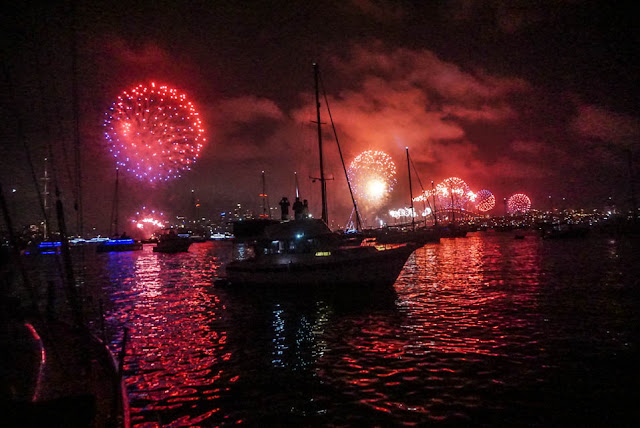 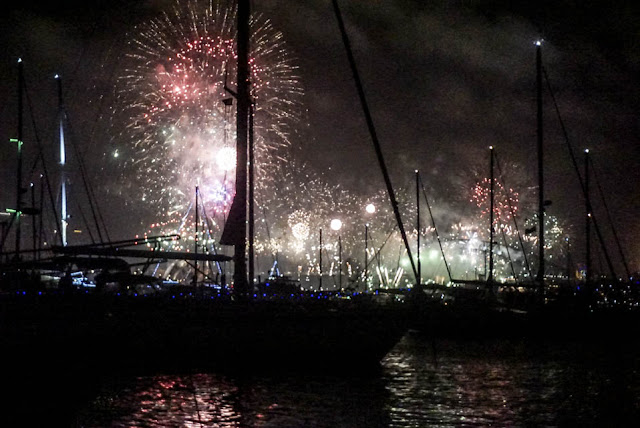 As for the fireworks, they were absolutely spectacular. It seemed like they were exploding all around us in a 360-degree phantasmagoria of light and sound. The Sydney Bridge looked like a waterfall of white sparkles with multicolored bomb bursts of color overhead. Despite all the hassles, it was a “once in a lifetime event” and we were so glad we got to see probably the best firework show we have ever seen and a great way to welcome the New Year.  Happy 2018 to you all!
Posted by Walter at 10:43 PM No comments:

We finally got our Christmas wish:  our grandchildren would be visiting us during the Christmas Holiday.  They were scheduled to fly from Guatemala and arrive in Sydney Dec. 18th.
With guests coming, we were a little rushed to get the varnishing done on the cap rail and stripping all the old caulk from our teak decks, along with the micro cleaning of the boat that only Meryl can do when she knows we're having company.

On Dec. 18th our daughter Christa, her husband Andrew, and two very active children, Quinn age 7 and Conner age 5, arrived at the marina, tired from nearly 25 hours of traveling but anxious to see Mimi and Boppa's (that's us) boat.

Taking everyone out in the dingy, along with luggage, required a bit of magic but we finally got everyone settled and headed one hour north to Coasters Retreat, a wonderful anchorage nestled in the Ku-ring-gai Chase National Park. I'll let the pictures tell the rest of the story.

Posted by Walter at 5:57 AM No comments:

Australia: Being Tourists in Sydney

Our dear friends Paul and Irene Ballew braved 24 hours of flying from Issaquah, WA to visit us in Sydney. We stayed on the boat the first two nights so they could experience the joys of hand flush toilets and being rocked to bed each night by the waves.

After getting reacquainted and hearing everything about each other's families, we decided to explore the local area and get some exercise. We took a wonderful walk (two times) up to Church Point (on the northern shore of where our boat is anchored) to the venerable Church Point Cafe.

On Dec. 4th we drove down to Sydney (that's worth a blog post by itself as we circumnavigated the block three times with Walter on Google Maps trying to find the entrance to our AirBnb condominium). Paul and Irene had booked a great AirBnb right across from the Sydney Fish Market in Blackwattle Bay, just a short walk to Darling Harbor and downtown Sydney. We took a lot of pictures of our stay in Sydney and they tell the story best.

On Dec. 6th we walked down Pyrmont Bridge Road to the Pyrmont Bridge, which is used only as a pedestrian passage and has wonderful views down to Darling Harbor. Our goal was to visit the famous Darling Harbor Aquarium that Meryl and I had visited over 20 years ago. 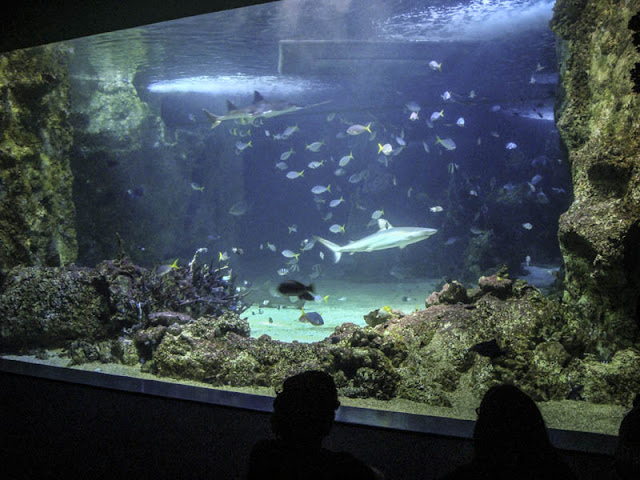 We discovered the joys of using Uber to get around metropolitan Sydney. I have to say it was one of the best transportation experiences we've ever had. We'd pull up the app on our iPhone (it already knew where we were) and give it our destination and instantly we were presented with a map of nearby Uber cars and how much it would cost (seems like most destinations where about US$ 7-10, which when split two ways wasn't much). The drivers would usually arrive in about two minutes and were incredibly friendly, many times given us a guided narrative to the town. At the end of the day we'd Uber to our condo and be dropped at the front door, great service since we were all usually wiped out by then.

Our next days adventure was to explore the downtown area and the Sydney Opera House. We'd arranged for a free walking tour that began in Hyde Park (you make a donation at the end) and Meryl had booked an Opera House tour for 3:30 pm. 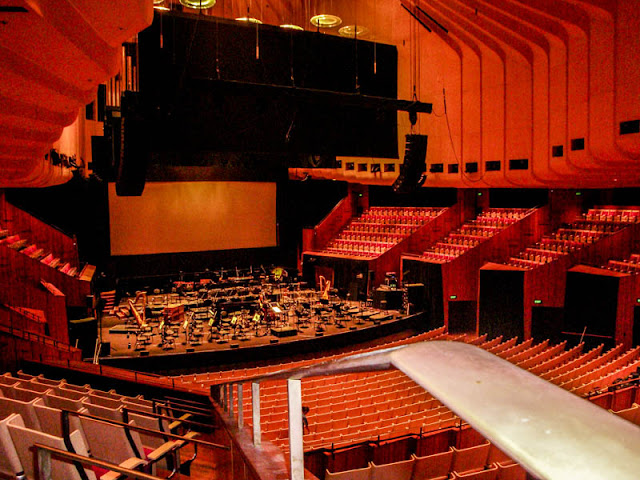 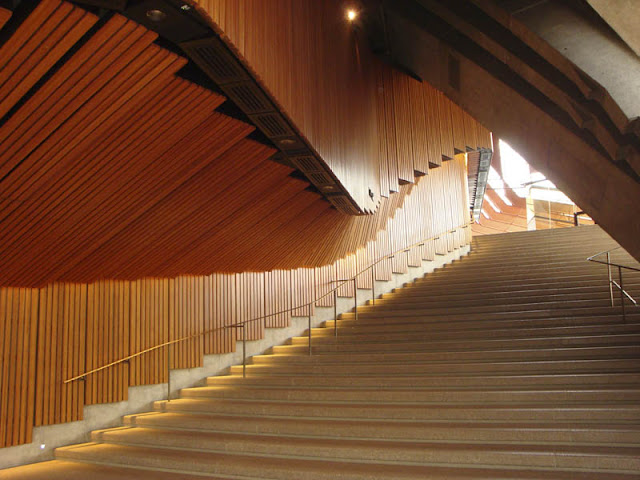 Back at the condo we had envisioned staying up until all hours drinking and reminiscing, but to tell the truth we were all completely wiped out after the long days in the sun. Paul had a new FitBit on his wrist and we were walking between six and eight miles a day. Our next adventure was a tour of the Wildlife Sydney Zoo in Darling Harbor.

As you can see, it was a event-packed week for the Ballews and Conners. We originally had been neighbors in Bellevue, Washington and have stayed friends over the last 40 years. They are great people and it was very difficult to say good-bye, even though we'll be visiting them for a short time when we return to Seattle in February.

Posted by Walter at 5:39 AM No comments: